A member of the Petra genus, this species is unique in comparision to other members. Unlike most members of the genus, it does not build up a thick defensive exterior. Rather, this species prefers to always be on the move. Communicating through the emission of lights and frequencies, the navi floats to and fro, following the eldest member of its herd to more hospitable grounds. The eldest navi is considered to be pitch-perfect. The younger members will attempt to emulate this, allowing the herd to reach a certain frequency for movement. Because they must move in sync they are often floating stationary, communicating and recalibrating for movement. The eldest can be spotted not only from its size, but by its coloration. As the navi ages it accumulates more particles, transforming from a pale white and yellow to a deep gold. As it accumulates these particles it loses propulsion, and begins to get closer and closer to the ground where it will eventually die and become recycled, leaving its herd but rejoining the pattern of life. 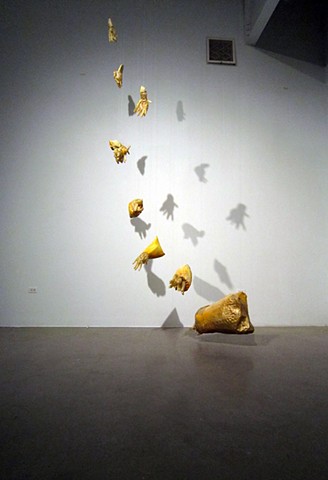